Song Of The Post: “Let It Rock” By Kevin Rudolf (This is a song I play before every big race because it gets me excited and ready to run.)

Well, the past few weeks have been pretty crazy and tiring, hence why it has been over two weeks since my last post. The main event of the past few weeks, The Capital City Half Marathon, went pretty well considering a few issues leading up to the race. The rest of things…well…have been a little tense.

The week before the race was going pretty well except on Monday I started to feel the numbness on my left side again. Since it appears like my numbness decreases with resting and taking it easy I decreased my mileage and even took off a day or two more then I would usually take during the week leading up to the race. It did seem to help as my numbness started to decrease more on Wednesday and Thursday.

Then came Thursday afternoon…I received a phone call from my insurance company that they will not be covering as much of my Tysabri infusions as I was originally told (Not to mention my insurance also told my doctors office, pharmacy, and the TOUCH program the same coverage they told me). As to be expected, majority of my Thursday afternoon and Friday afternoon were spent on the phone arguing or trying to get some answers on what could be done and if there was any way to really fight it.  Needless to say being tense, arguing and getting angry

Laying Out The Gear The Night Before

are not the ideal feelings to be having your last two days leading up to a half marathon. Luckily on Friday afternoon I was able to get it to a point I was able to “drop it” for the weekend and try to focus on the 13.1 miles that would lay before me on Saturday morning.

Friday night was pretty low key as I gathered my gear and laid it out for the next morning to make sure I would not forget anything. Half of my dinning room table was covered with a t-shirt (with bib already pined on), running shorts, sunglasses, socks, shoes, iPod arm band, headphones, hydration belt (Cliff Bloks in pouch on belt), belt water bottles, head band and stop watch. Ready to head out a 6am on Saturday morning.

Surprisingly I ended up sleeping pretty well Friday night. I woke up on Saturday morning at 5:15am and headed out to Columbus around six with my Dad and boyfriend as company to cheer me on.  We arrived at the start/finish line area about an hour before start time. I was feeling pretty good and not really nervous as this was my third half marathon start. We went to the bathrooms one last time then headed to the start to scope out the corral system where I put on some sunscreen and got together the rest of my gear for my run. At around 15 minutes till start I headed into my corral to do some last minute stretching and started to prepare myself mentally for the race.  Well, at around 5 minutes till start I realized that I had not taken my Clif Bloks (these are gummy energy cubes I take instead of the energy gels).  I quickly threw some in my mouth in hopes they would kick in quickly.  Well, they did, just not in the way I had planned.  At about 1 minute until start time I started getting nauseous and ran to the edge of the corral where I ended up throwing up a part of my breakfast. The gun had gone off for the first corral and my corral’s start was coming up. I quickly evaluated how my stomach and the rest of me was feeling to see if I was able to actually run the race today or would have to sit out at the last minute.  It appeared like everything was ok so I jumped back in my corral and took off. (Yes, I know I am crazy.) I didn’t feel the greatest for about the first quarter mile but then 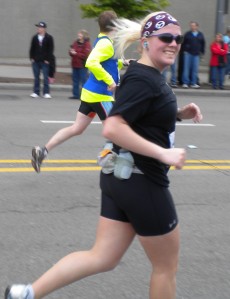 started to get in the groove.    Later on in the run I concluded that I probably still had sunscreen on my hands when I took the Bloks which probably got on the Bloks and caused my “upset stomach”.  Coming to this conclusion made me scared to take my next set of Bloks during the race which did not help my energy level.

The rest of the race went pretty well except I had not prepared myself as well as I thought. I had forgotten to check out the elevation chart for the new course…the new course was almost a steady incline until the end. I went out a little too fast in the first few miles (probably thrown off by my interesting start) so started struggling at about the 9 mile mark plus was scared to take my Bloks for energy. My main motivation was if I keep running it will be over quicker. I did not set a new PR by any means but still came in at 2:07:57 which was two minutes under my first half marathon time.

Finish Line At The Capital City Half Marathon 2011

All in all not to bad of a day I guess, considering all the craziness leading up to it. I am starting to wonder if I am a runner who is just not going to have very many races where I have normal pre-race days.  I think so far only my second half marathon has been “normal”.  I need to update everyone on my couple days leading up to my first full marathon but that is definitely saved for a later post or you would be reading all night.  Jeez, also still have to write the post about the MS Walk and the Mud Run is coming up next week!  I need to get typing!  So much to write, so little time.