Wow, I can’t believe I am finally just 5 days away from the marathon! It feels like it has been such a long journey since I wasn’t able to do any full marathons last year.  The mixture of my MS issues and running injuries just kicked my butt in 2011. Pretty excited for Saturday. I will admit there is a small part of me that is saying “And why did I want to run 26.2 miles again?”. I do remember some pain from the first marathon but overall I really enjoyed the experience.

Speaking of that pain…I never got to tell the story of my first marathon last year since I was saving it for the next time I ran a full marathon. Well, the first marathon I ran was the 2010 Columbus Marathon which was on a Sunday in mid October. I had trained throughout the summer and was pumped for the marathon. Then came Friday morning just two days before the marathon. I wasn’t feeling well as I was getting ready for work and all of a sudden threw up in a trash can. I was a little worried at this point but thought it was probably just food poisoning. I stayed home from work in the morning and just tried eating the basic things like crackers, toast, and chicken soup. Was feeling a little better so headed to work in the afternoon and then had a basic dinner Friday night.

I woke up the day before the marathon and now things were going right through me. Not really helpful when you need to build up nutrients for your 26.2 mile run the next morning. I was pretty upset this time and called my Mom to discuss things since they were planning to drive me the next morning. We decided to go to the store to get some Pediasure (suggested by a running friend) and few other things packed full of nutrients that we thought I would be able to handle. So my lunch before my big marathon was Pediasure and I believe I also drank some juices in the afternoon. By dinner time I was feeling a little more normal and attempted some pasta which seemed to do just fine. Looks like I was back in the race!

The morning of the race came and I didn’t really get much sleep (not uncommon for most people) but I was ready to go. I had my cereal and yogurt and felt great.  We live about a hour away from Columbus so we had to get up pretty early and made it to the starting line a little later then I had planned but we made it. The first 13 miles were a little frustrating because there were just so many people but then when the half marathon turned off and the full route kept going straight you all a sudden felt very lonely. I felt pretty good until about the 19thmile where I stopped and stretched for a few minutes. I was starting to hit that infamous “wall”. It was hard but I was able to push myself through the remaining seven miles and finish in a time of 4:23:43. I was really hoping to take no longer then 4:30 and I made it with little over six minutes to spare! 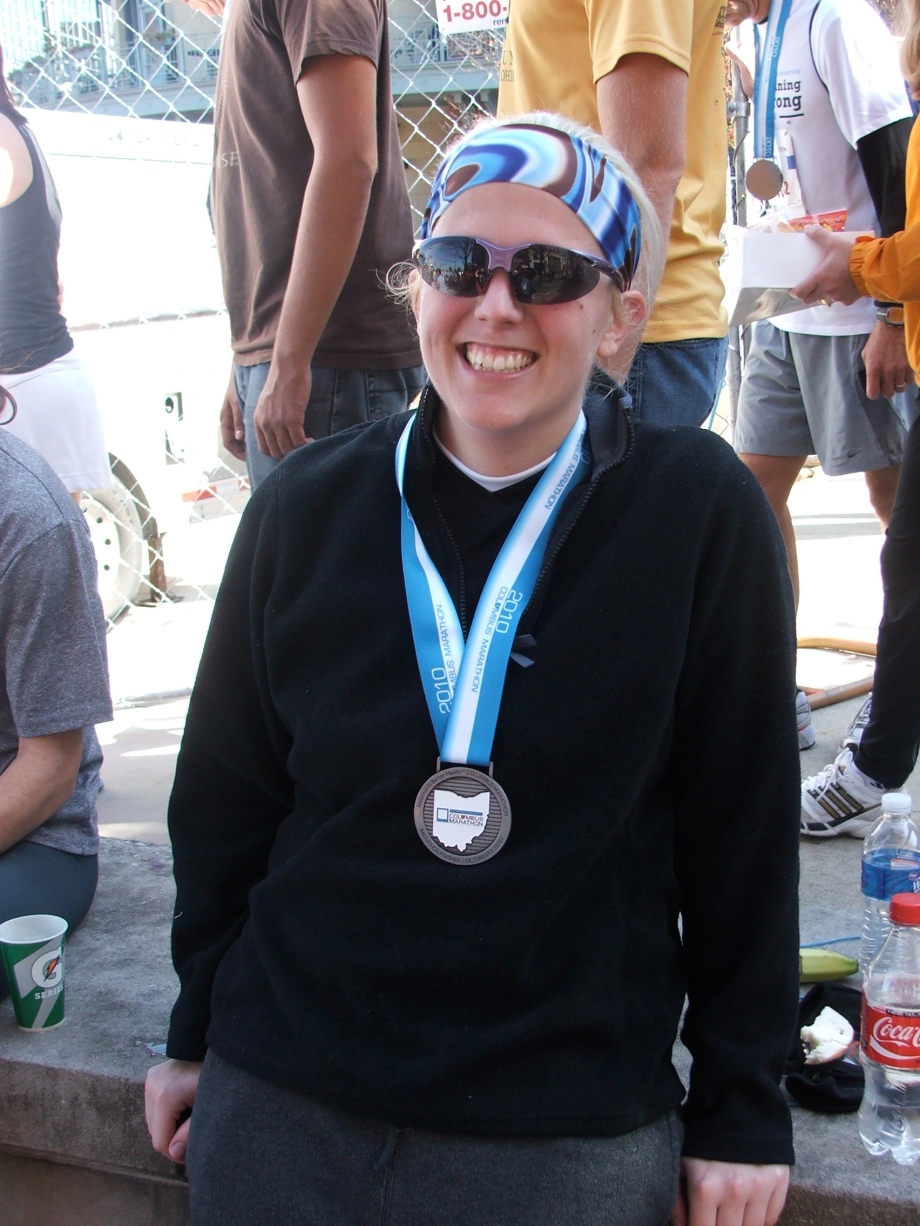 Relaxing after the race in my sweats trying to warm up.

Right now it looks like I shouldn’t have any issues this week but who knew I would be sick with food poisoning or something just two days before my first marathon! Just hoping that I don’t have any issues leading up to the marathon and definitely hoping to beat my time of 4:23:43!