Little over a week late but still wanted to write a quick post on what I decided to do last Saturday (September 15th). Since I was struggling with the injured hips off and on and still had not been as consistent in my training as I would have liked I had told myself I would not run the Air Force Marathon even though I already paid for it. Well, after I finally ran 18 miles the weekend before the marathon I started throwing around the idea of still running the marathon. The week leading up to the marathon I really wanted to run it but was still nervous I hadn’t trained enough and that I might hurt my hips even more for The Dresden Marathon. Well, once I went to go pick up my bib and tech shirt two days before I think that sealed the deal, I was definitely going to run it.

I probably slept about 8 hours Friday night which was the most I have ever slept the night before a marathon. I felt relaxed and just in a good mood. Well, parking took a little longer then it had in past years so by the time I got to the start line I had enough time to quickly go the bathroom then run to the start area with just a few minutes to spare.  (Which meant I didn’t stretch at all before this marathon, luckily I had spent a good amount of time the night before stretching). I realized after the cannon (yes, they started us off with a cannon this year) that I had forgotten my watch to keep track of my pace.  (Insert minor freak out moment, and probably some cursing under my breath) I quickly brought up the stopwatch feature on my iPhone to at least keep track of my time and decided to try to run with the 4:10 pace group just to have a better idea how I was pacing.

We started out on the course and about a mile into the race (as we are starting up our first hill) I did think to myself “Why did I think this was a good idea again?”. Luckily I stopped those thoughts very quickly and just started to focus on the climb ahead. The first 10-12 miles felt pretty good and the pace felt great. I stayed with the pace team until about 17 miles when my right hip started acting up. I slowed down to try to maintain my right hip without stopping or walking but eventually the slow jog wasn’t working anymore. For most people (including myself) walking or stopping to stretch can be one of the worst things because it is hard to get the body going again. Eventually i gave in and started to walked off and on, it was the only way to decrease the pain. However I didn’t dare to stop completely and stretch, knowing my body would tighten up. I was doing ok with running for a while then walking for a little bit if needed for the hips as I passed the 20 mile marker.

There are a few sizable hills at the end of the race so I decided that I would try to walk/slowly run up these hills to try to save my hips for Dresden. (For some reason it really decreased the pain in the hips when I walked up the hills rather than ran.) Well, when I hit around 22.5-23 miles I got a cramp just to the right of my belly button. I started walking but it just wasn’t going away. I tried “speed” walking but even that was too painful to deal with for very long. Even though it killed my pride I ended up walking the rest of the marathon except about the last half mile. I wasn’t going to finish walking so I slowly jogged to finish.  It was a little painful but there was the pride thing and also I just wanted to finish the race already. It was great getting my marathon medal (guess it always is) and getting something to eat. The cramp started going away fairly quickly after I finished and was gone by the time I started walking back to the car. And luckily for me my hips felt back to normal within a day or two. 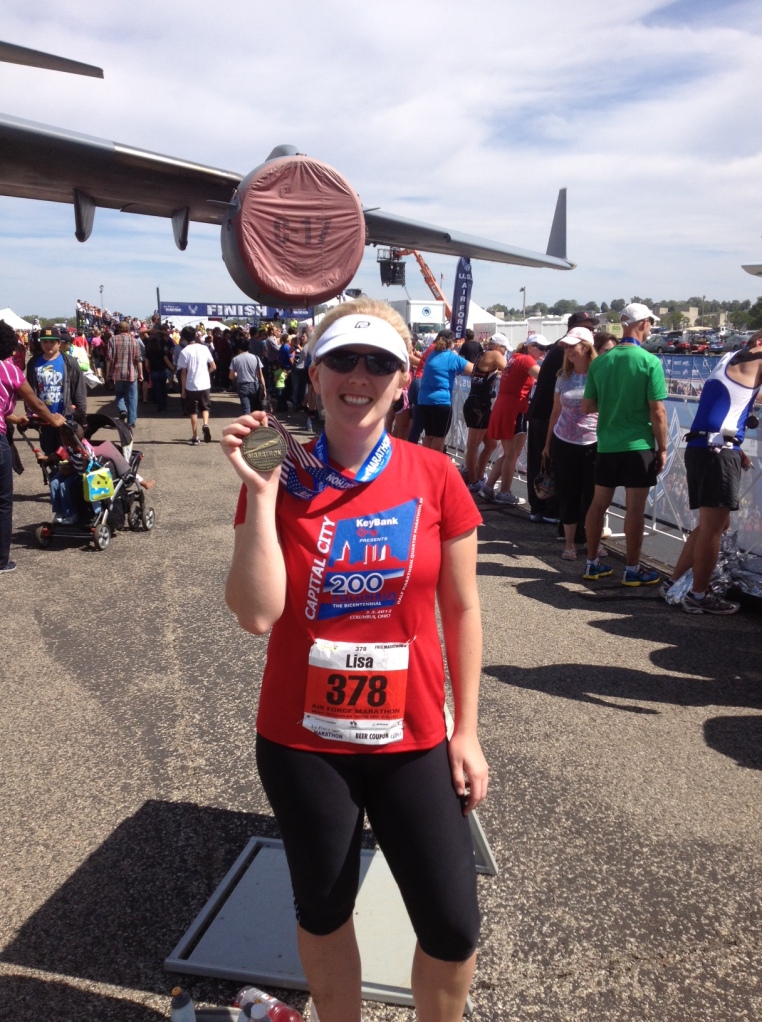 Well, I finished and that is what my goal was for the day since I definitely wasn’t fully back from being injured to run a marathon yet. It obviously ended up being my worst time out of the three marathons I have ran but I am still glad I did it. I learned that I might be walking some in the Dresden Marathon due to the hips but that is ok. The Dresden Marathon is all for the experience, I cannot wait!

Ok, so did not even realize it had been over two months since my last post! Wow. Guess I have really been laying down on the job. Hopefully I will be able to catch everyone who doesn’t follow me on Twitter or Facebook up to speed.

Well, for those of you who don’t follow me on Twitter or Facebook, I ended up having bursitis in my both hips. Something in my stride was definitely off and even after a shot in each hip I was still having some pain so my doctor referred me to a specialist. (The doctor he was planning on referring me to actually couldn’t get me in for four weeks so I said to hell with that and called the Sports Medicine department at OSU and they got me in two days later.) The doctor at OSU told me I could run but just no hills for a while. He also recommended that I go to physical therapy because my hip muscles were weak and that is why I was having all of these issues. I guess weak hips is pretty common with runners.

I went to physical therapy for about five to six weeks starting at the end of July. It seemed like it did help however I was absolutely exhausted during that time, especially during the week. I would feel like I finally felt better by Sunday then be exhausted by Tuesday or Wednesday again. It was rough and I was very thankful when they finally discharged me at the end of August. My hips are still sore at times and still hurt off and on during runs but seem to slowly be improving. After the Dresden Marathon I am definitely taking some time off and maybe just doing some minor workouts. My body definitely needs to heal.

Obviously as I said it has been over two months since I the last time I posted on here but sometimes I have taken a while between posts on Facebook/Twitter as well. It seems like the hip injuries have messed with me mentally a little more than I would like. Sometimes I would think of writing an update and just wouldn’t write it. I don’t know if it is the pain, frustration or exhaustion that really does it or if I have just been feeling the pressure of the Dresden Marathon and going to Europe. I have had a few issues here and there during my training the past month but it didn’t seem like that was really the problem. It has been a little odd at times and I don’t feel completely back to normal yet but hopefully I will get back on the bandwagon again soon.

The past few weeks have been fun, stressful and exhausting. The little amount of sleep and stress finally got to me this past weekend and that is why you haven’t heard from me on here or even on FB and Twitter for a few days. I still don’t even feel like I have recovered now but work has calmed down some so life is somewhat better.

I still have electricity if that is what everyone is assuming is one of the issues since it is all over the news how many people are still without it. I did loose electricity on Friday, however it was only for four hours, I was one of the lucky ones I guess. I did however have some flooding in my basement on Sunday night which caused some water damage to a few things that were stored down there but nothing I was really upset about. It was just stressful trying to save a few things.

Now on to the bigger issue at hand. On Sunday morning I went out for my 13 mile run and only made it about 1.5 miles before I was having quite a bit of pain in my right hip that I could not stretch out and didn’t seem like it would get better if I pushed on. I decided to call it quits there and just swim later in the day at the gym. I didn’t really feel any pain when I was walking just when I was running and occasionally when I was sitting. I iced my hip on Sunday and took some ibuprofen but still decided to take off Monday just to give it some more time to hopefully heal. I was still feeling some discomfort on Tuesday morning so I decided to try cycling instead which went very well however it still didn’t overly feel like it was healing. Since I have two big races in the fall (Air Force Marathon and Dresden (Germany) Marathon) I called my doctor’s office shortly after they opened because I wanted to hopefully figure this out quickly so it would heal quickly.  They ended up having a cancellation yesterday so they were able to fit me in which was wonderful. I discussed a few different symptoms I have had over the past few weeks to my doctor and he diagnosed me with trochanteric bursitis. Basically one of the sacs that protects my muscles, tendons, etc from being damaged by my hip joint is inflamed probably due to either my change in workout or change in my stride/cadence due to my numbness in my left leg. He gave me a shot of steroids right into my hip and told me to rest for three days which is a little rough to take but hopefully this will help and I will be back training this weekend.  I hope!